Before I start, some context: Nearly 350000 people have died from the virus worldwide, and according to recent studies, Coronavirus is more fatal in men than women, with about 60% of deaths being men (source: globalhealth5050.org/covid19). Despite this, Ford continues to stand behind her statements, only taking down the tweet and issuing an “apology” when the Melbourne City Council stated that they were “reviewing” her ratepayer (basically an arts grant).

So let’s just break down her apology:

“because some men (not all of them!) clearly need context explained to them, the Corona tweet was in response to this article, outline yet again the unpaid domestic burden men place on women, because they can’t care for their own fkn kids.” (1/10)

The Article was about the perspective of a single mother, who relied on being able to send her kid to school in order to work and earn money. However, some further digging brought to light that the mother in question receives 1500 AUD per week, having separated with the father after cheating on him. The father has no visitation rights. Who’s the bad guy here? According to Ford, the father. Why? Because he’s a male. The person in the article can more than afford to stay at home and take care of her kid, but instead chooses to post a sympathy story on the internet in order to garner attention.

“Christ alfkn Mighty, men love to screech about snowflakes and triggered feminists and women not being able to take a joke and they crumble at the first sign of a hyperbolic tweet that doesn’t place them as gods at the centre of the universe. Ding dongs, all of them.” (2/10)

A “hyperbolic” tweet? The President of the United States issues “hyperbolic tweets” on a daily basis, and literally NO ONE CARES because we recognise the steaming pile of garbage it is. But for someone who has such an influence on young women (and men!! I’ve read both of Ford’s books and they were quite good), words should be chosen with the utmost care. Think about Trump’s statement a few weeks ago when he suggested injecting disinfectant, and how the medical community scrambled to remind everyone of how utterly idiotic that idea was. And this is a man who we EXPECT to be controversial and, frankly, idiotic. Imagine the impact when someone, who young people around the globe revere as an ideal of equality, says that “coronavirus isn’t killing men fast enough”? Ford has a son, who is about 4 years old. Should he die too, just because he was born with male genitals?

“I’m a big enough person to admit when I’ve misjudged something. I still stand 100% behind my fury at men exploiting women’s unpaid labour (exacerbated by the global pandemic), but I’ve reconsidered my flippancy in discussing it. I’ve always maintained that the difference between jokes that punch up and down is the reality of harm. Eg joking about firing men into the sun has no basis in reality and therefore no potential to further harm, while “jokes” about domestic abuse are very much reflective of an extensive harm already in place.” (3 and 4/10)

In case it wasn’t clear from part 1, the article that apparently triggered this tweet had nothing to do with a man being a terrible human being. It was simply another attention grab by one of the millions of people on the internet who just want their 15 seconds of fame. (To be clear, there are plenty of men who are terrible human beings. But there are also women who are equally terrible.) Other than that small aside, this section is perfectly sensible. “Jokes” about serious (not to mention current) issues require serious forethought before you hit that tweet button. Even a cesspool like some parts of reddit have a “no violent tragedies” rule. In times like these, a statement which has been described by Lord Mayor Sally Capp (Lord Mayor of the City of Melbourne) as “deliberately divisive” seems to be fuelled by malicious intent.

“The corona tweet was contextually in response to the fact women are once again shouldering the burden of domestic labour at the expense of their own economic freedom, being let down by men who are in turn upheld by systems that have privileged them. It is acceptable to express fury at that, and it’s disappointing more men aren’t outraged by this reality. But based on my own metric outlined up thread, I have to accept fault for the corona tweet because it made a flippant joke about something that IS actually a harmful reality, and one that affects marginalised men disproportionately, not to mention robs people of their loved ones. Regardless of what people want to think about me, I have no wish to compound harm and grief for anyone, nor be dismissive of the very real impact and fear a crisis like this presents.” (5, 6 and 7/10)

At this point, I might as well copy-paste my last 3 responses to the opening statement of your threads, so I’m just going to skip over the first line.

YES, it is acceptable to express anger at men who have, time and time again, discriminated against women simply for being women. But (you know what? Most of this was covered in section 1. You can skip ahead a bit if you want, I don’t mind) once again, this was not a case of a man being an a**, but rather a woman who has destroyed a man’s life and chooses to play victim.

In September 2019, I wrote a response to another statement in which a woman recommended dating guys with anxiety because you could blame them for your faults and they would believe you, you could cheat on them and say it was because they weren’t doing enough for you, and tear their life to shreds for self-benefit. As said woman’s boyfriend at the time, the mental and emotional trauma that she caused me, both during and after our relationship, has impacted not just my more recent relationships, but my trust in the people around me. This tweet has the same effect, and the same standpoint. That the men of today should be held responsible for centuries of systematic oppression, and that men are beneath women as a result. Ford’s standpoint is reminiscent of the Trans-Exclusive Radical Feminist movement, and anyone with any experience with TERFs knows exactly what I’m referring to. The sheer ignorance and stupidity of the statement in question is enough to make anyone with an ounce of logic retch. Side note: maybe men would be more willing to acknowledge women issues (such as the gender wage gap, over-sexualisation in the media, etc.) if every time its brought up, its not accompanied by “kill all men” 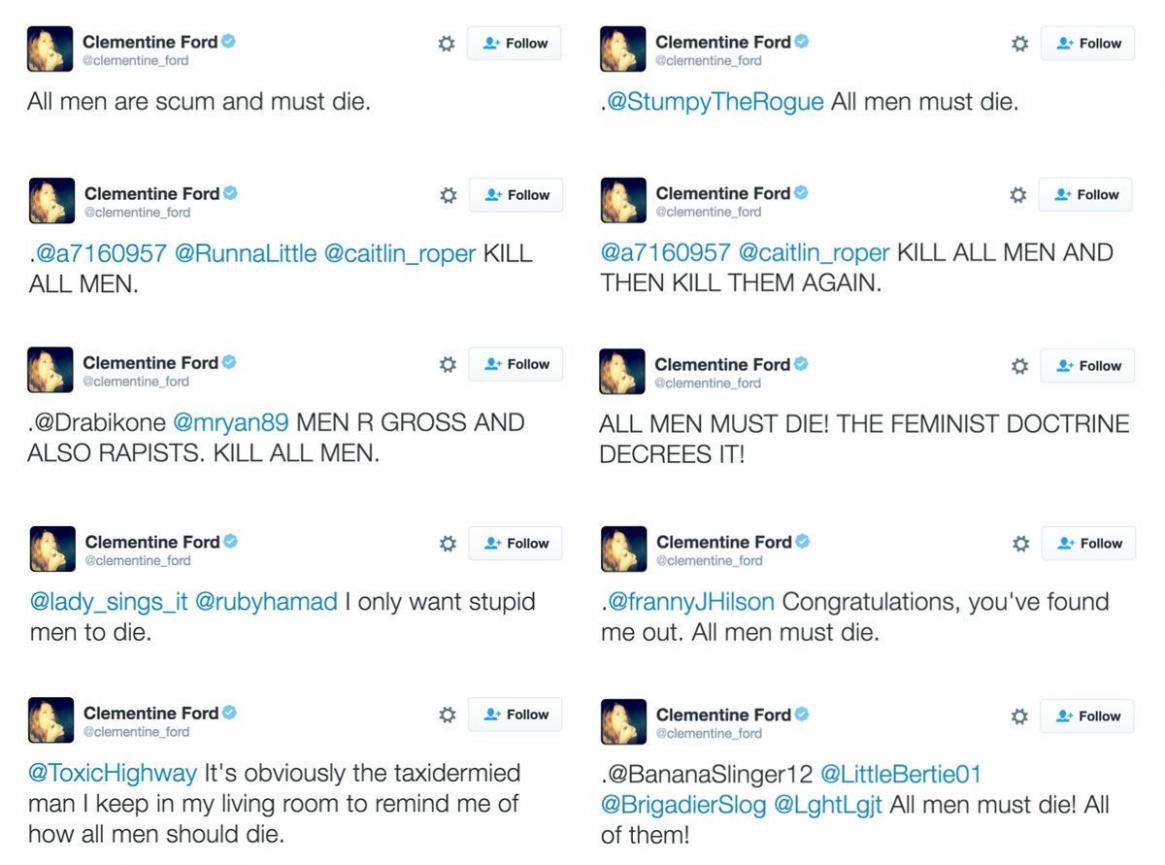 . This isn’t the first time this has happened.

“But I also think it’s fair to be angry at the lack of interest in this crisis’ impact on women. To be astonished at how women are expected to perform the essential tasks that allow men to thrive, at the expense of women’s stability, while being denied recognition for that work.” (8/10)

Completely agree, but see ALL OF THE ABOVE about why it’s irrelevant.

“A flippant (and yes, poorly judged) tweet doesn’t change that reality and it shouldn’t shift the focus away from it. If we benefit from privilege, we should also be robust enough to accept critique of the systems that privilege us and work to change them.” (9/10)

“Anyway, this acknowledgement isn’t for the men who are looking for any reason to ignore patriarchal impact but for the people genuinely hurt by my words. I’m sincerely sorry, and I wish I had framed my argument in better terms and in a way that didn’t compound harm. Be well” (10/10)   See previous.

Also, did anyone else note that the word “sorry” or “I apologise” wasn’t used ONCE in nearly 500 words (473 to be exact). Now, if anyone has a better way of framing the statement “Honestly, coronavirus isn’t killing men fast enough,” feel free to email me.

Also, the structure seemed kind of familiar. Why? Because its almost identical to her apology for “All men must die” (2018), or Logan Paul’s Suicide Forest apology video, or TmarTn’s underage gambling apology video. They all go something like this:

Feminists with a voice and a platform as powerful as Clementine Ford have a responsibility to promote equality and unity, not hate.

Running damage control as soon as money is on the line doesn’t help anyone except the people who, for whatever idiotic reason, legitimately believe in anti-suffrage.

Come to a nation like Italy, and say to mothers, daughters, sisters, wives, nieces, friends, that their sons, fathers, brothers, husbands, uncles and friends are not dying fast enough. Because this isn’t a statement supporting feminism at all. This is a statement which is designed to hurt the people who are at their worst.

You want to talk about killing all men? Don’t do it in a country like Australia, where:

And DEFINITELY don’t do it when you’re actively being investigated for being responsible for the suicide of a 14 year old transgender teenager who called you out on one of your dozens of misandrist posts. (His name was Hana Kimura. Look him up.)

This is most likely one of the least genuine apologies I’ve seen. People has to realize there’s idiot men, and idiot women. Sex and gender has nothing to do with it. Individuals are the issue here, and here’s a prime example of one of them.